On January 16, 1945, the fog clears and the British launch Operation Blackcock. The aim of this operation is the liberation of the Roer Triangle between Roermond and Susteren. Although the scale of the operation is not particularly large, it is a special operation.

Operation Blackcock
After the capture of the German city of Geilenkirchen, a triangular enemy salient was left. North of this border town, the front line turned west to the Maas and then northeast to the Roer near the city of Roermond. Clearing this triangle, and with it the strategic German city of Heinsberg, would both straighten and shorten the front, allowing more Allied soldiers to be deployed for the Rhineland Offensive in February 1945.

The operation to clear this triangle was codenamed Blackcock and was initially planned for November 1944. But like all Allied plans, it was delayed by rain, fog, snow and the German counter-attack in the Ardennes. Ultimately, Operation Blackcock was scheduled for January 13, 1945.

The operation was conducted by the British XII Corps consisting of the 7th Armored Division on the left flank, 52nd Lowland Division in the center and the 43th Wessex Division on the right flank. These divisions were supplemented by units of the 79th Armored Division which consisted of specific purpose tanks such as the Churchill Mk-VIII “Crocodile” flamethrower and the Sherman Crab minesweeper. During this operation there was so much fighting that many villages and towns were badly damaged. Monfort was hit by heavy Canadian bombing on January 12 and 22, killing many civilians.

On January 27, 1945, Operation Blackcock ended for the British, with the German bridgehead at Herten/Merum and at Vlodrop remaining intact. Roermond, the top of the triangle, had to wait another month for her liberation. 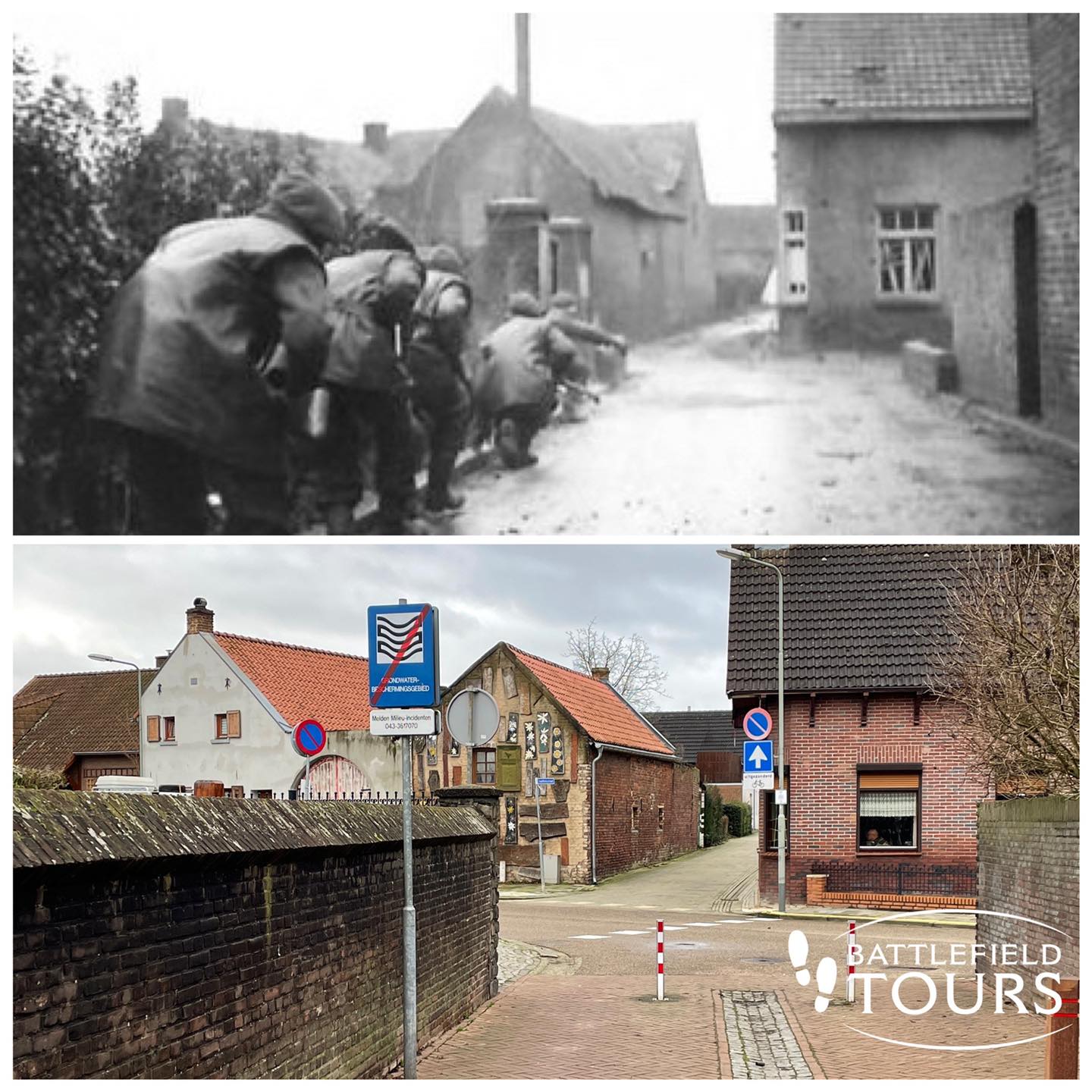 This photo shows British soldiers of the 1st Rifle Brigade, 7th Armored Division during a patrol on January 3, 1945 in the village of Nieuwstadt north of Sittard. © IWM 13384 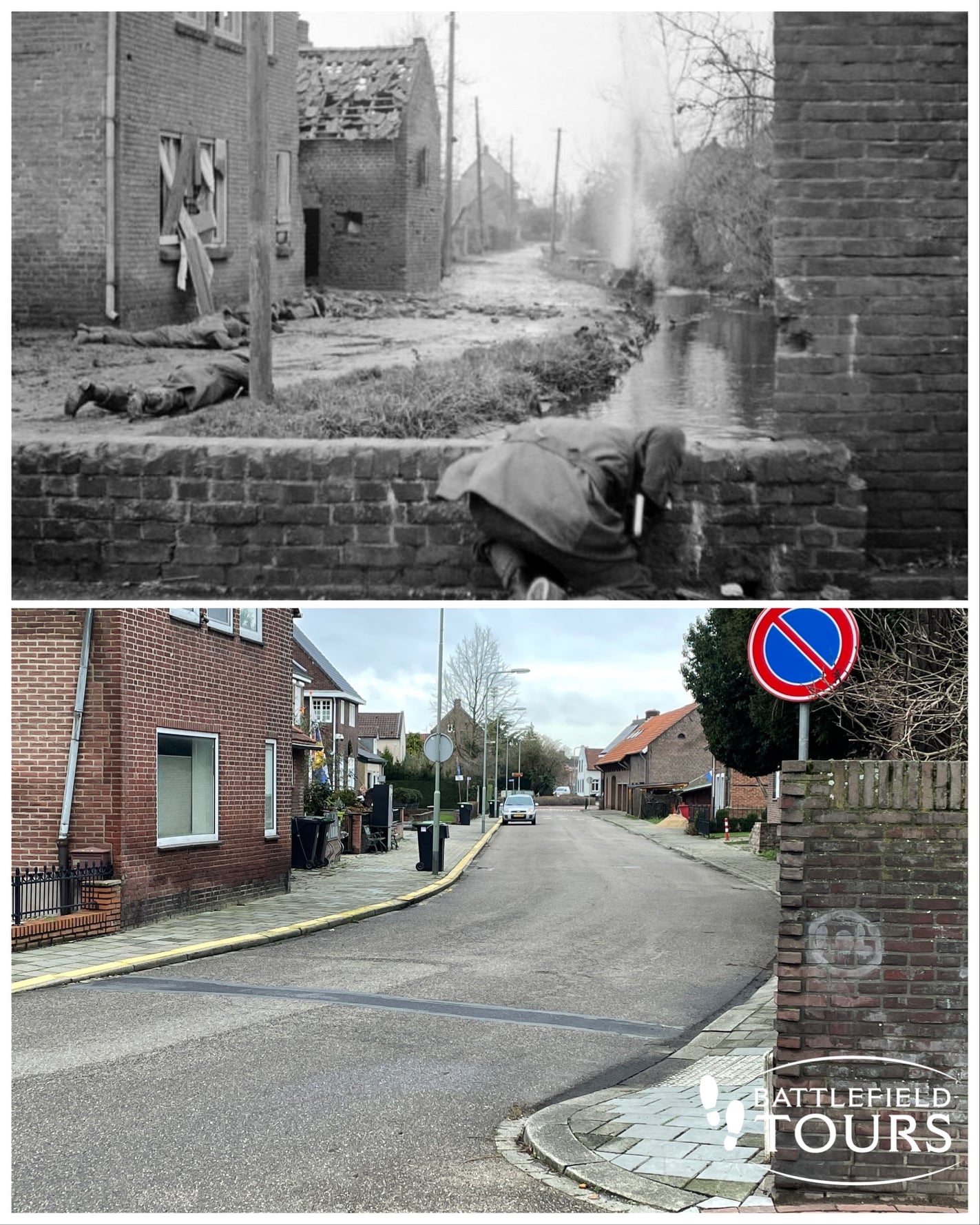 This photo shows British soldiers of the 1st Rifle Brigade taking cover after a mortar bomb exploded in a stream in the village of Nieuwstadt on January 3, 1945. This then and now photo was difficult to take because the road has been widened. © IWM B 13385 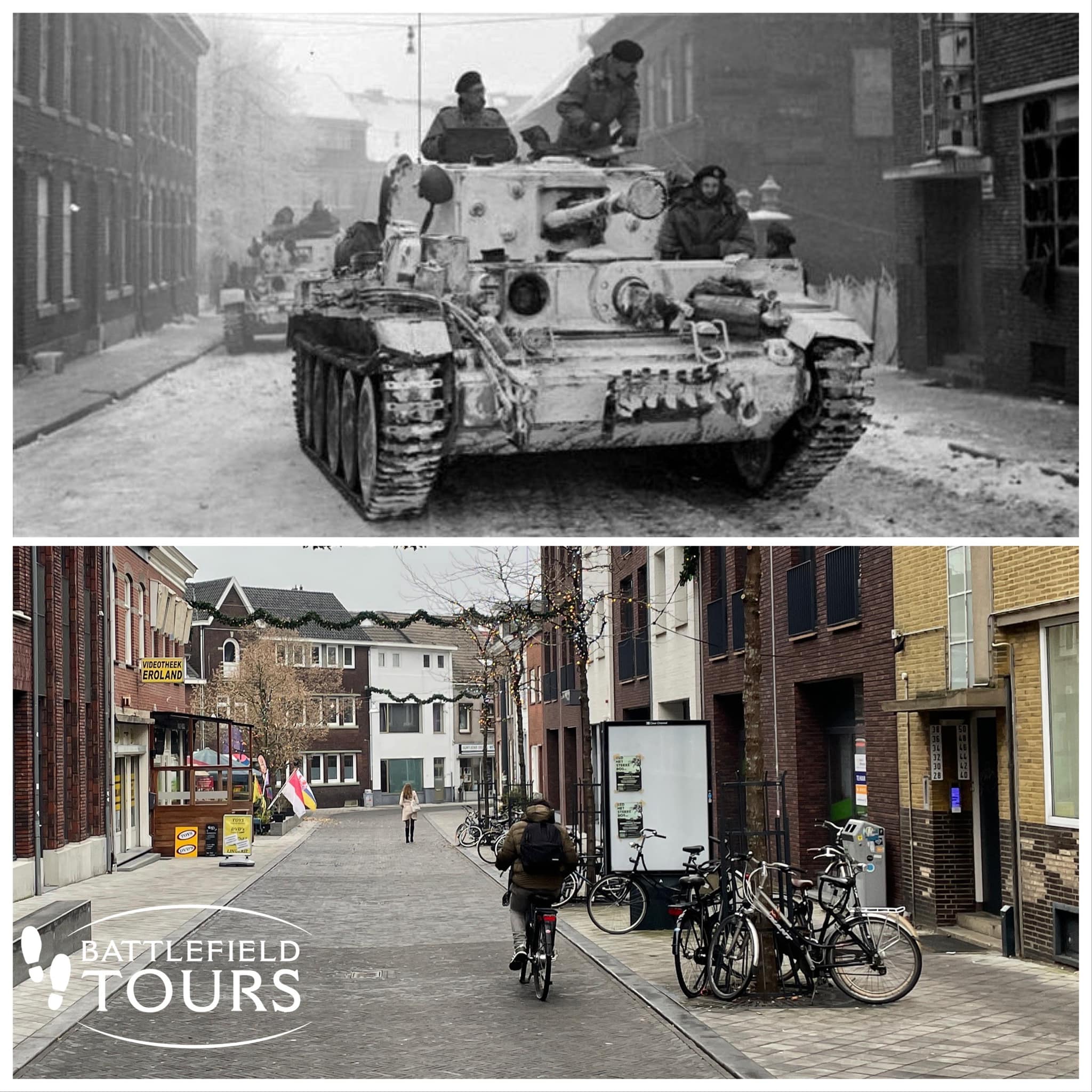 In early January 1945, British units of the XII Corps, led by Lieutenant General Neil Ritchie, concentrate for Operation Blackcock. Before the attack, the tank regiments of the 7th Armored Division formed a long column on the Rijksweg in Sittard. This road was more or less the gateway to the Roer Triangle as it was the only road suitable for moving heavy vehicles. This photo shows how Cromwell tanks of the 5th Royal Tank Regiment drive through Sittard to the front line on January 15, 1945. 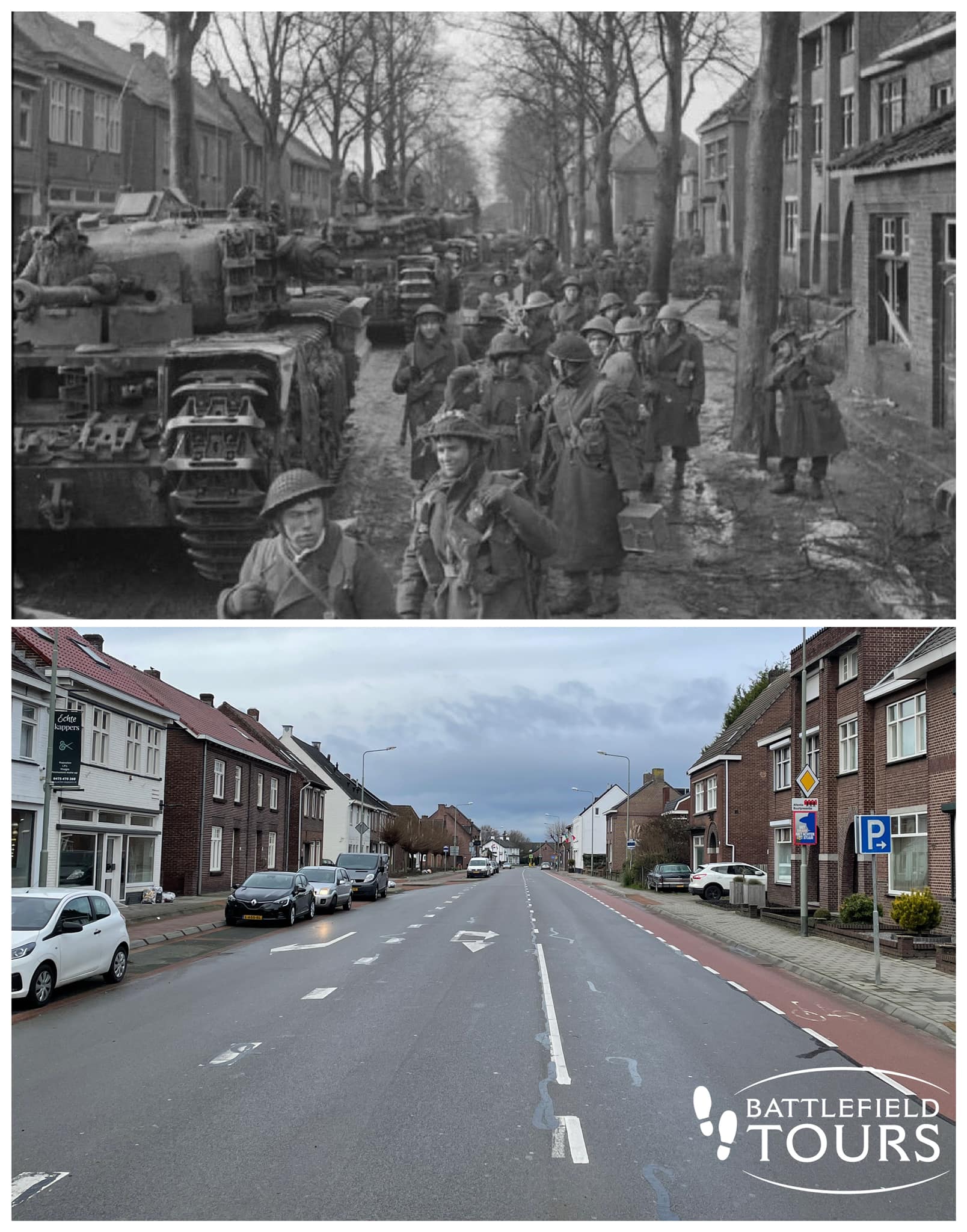 The 7th Armored Division “The Desert Rats” started their attack towards Echt on January 17, 1945. But on the Rijksweg they soon faced a series of German counter-attacks that blocked the advance. It is late in the afternoon when the first British soldiers and tanks reach Echt via the road along the Juliana Canal. In Echt, fierce house-to-house fights immediately ensue that last all night. It was not until January 18 that Echt was completely cleared by the 5th Royal Inniskilling Dragoon Guards.

Meanwhile, on the night of January 17 to 18, a unit with British tanks moved through Echt to the intersection of the Rijksweg near Pey. The Germans try to block the road to Koningsbosch and the area behind the German lines along the Saefellerkreek. The plan to attack the German units from behind near the German village of Höngen fails. The German units manage to extend the fighting around the crossing until January 19. When the first British units entered the village of Pey that morning via the Rijksweg from Susteren, the German units of the 176th Infantry Division commanded by General Landau quickly withdrew. This photo shows Church tanks and troops of the 9th Durham Light Infantry in Schilberg. © IWM B 13933 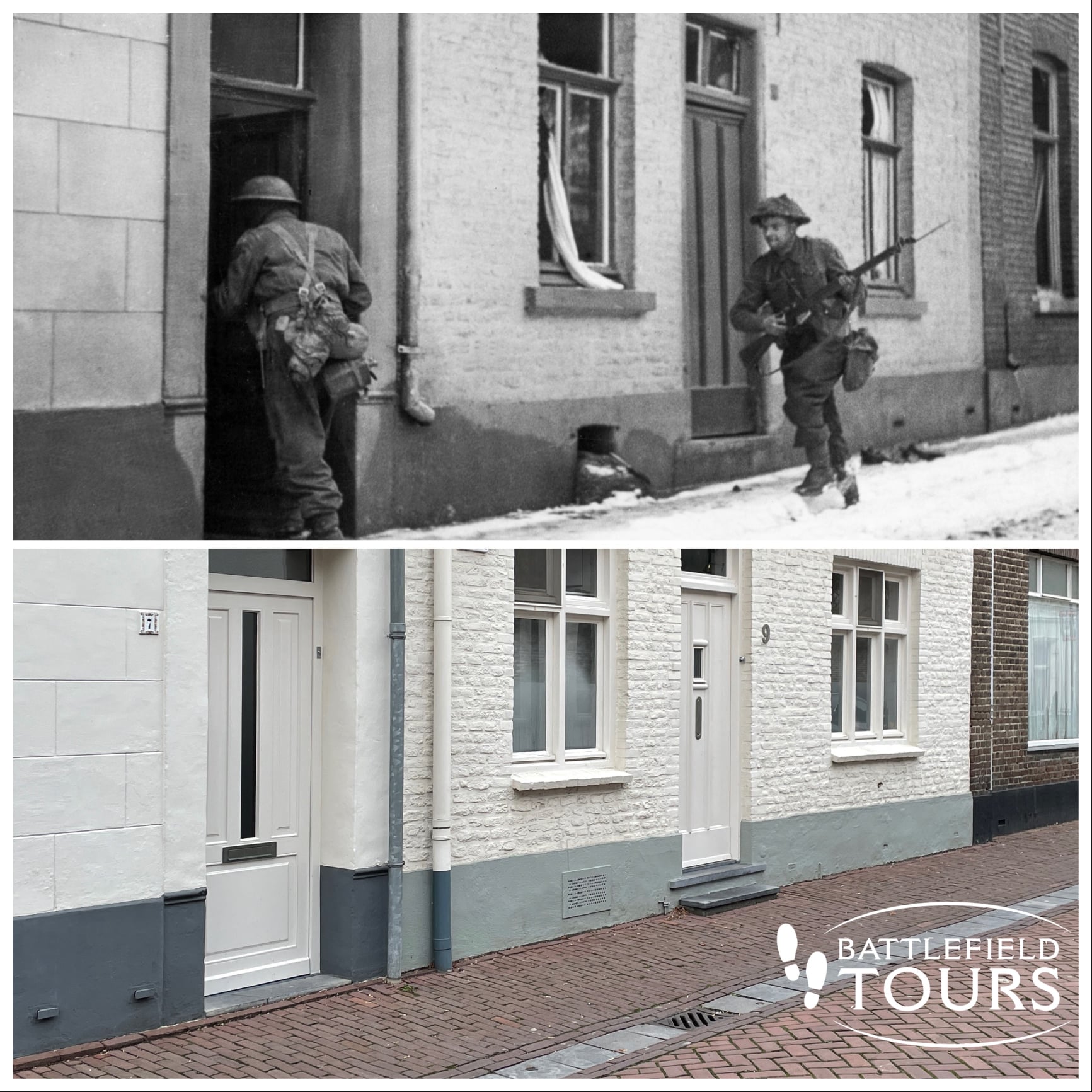 During Operation Blackcock, the British soldiers of the 5th Royal Inniskilling Dragoon Guards cleared the Dutch village of Echt after heavy street fighting on January 18, 1945. From Echt the British advanced further northeast and east in the direction of Roermond and Waldfeucht. With this they threatened to cut off the German troops at Susteren. Simultaneously with this action, the British launched another attack on Susteren. After this, the German resistance quickly collapsed. 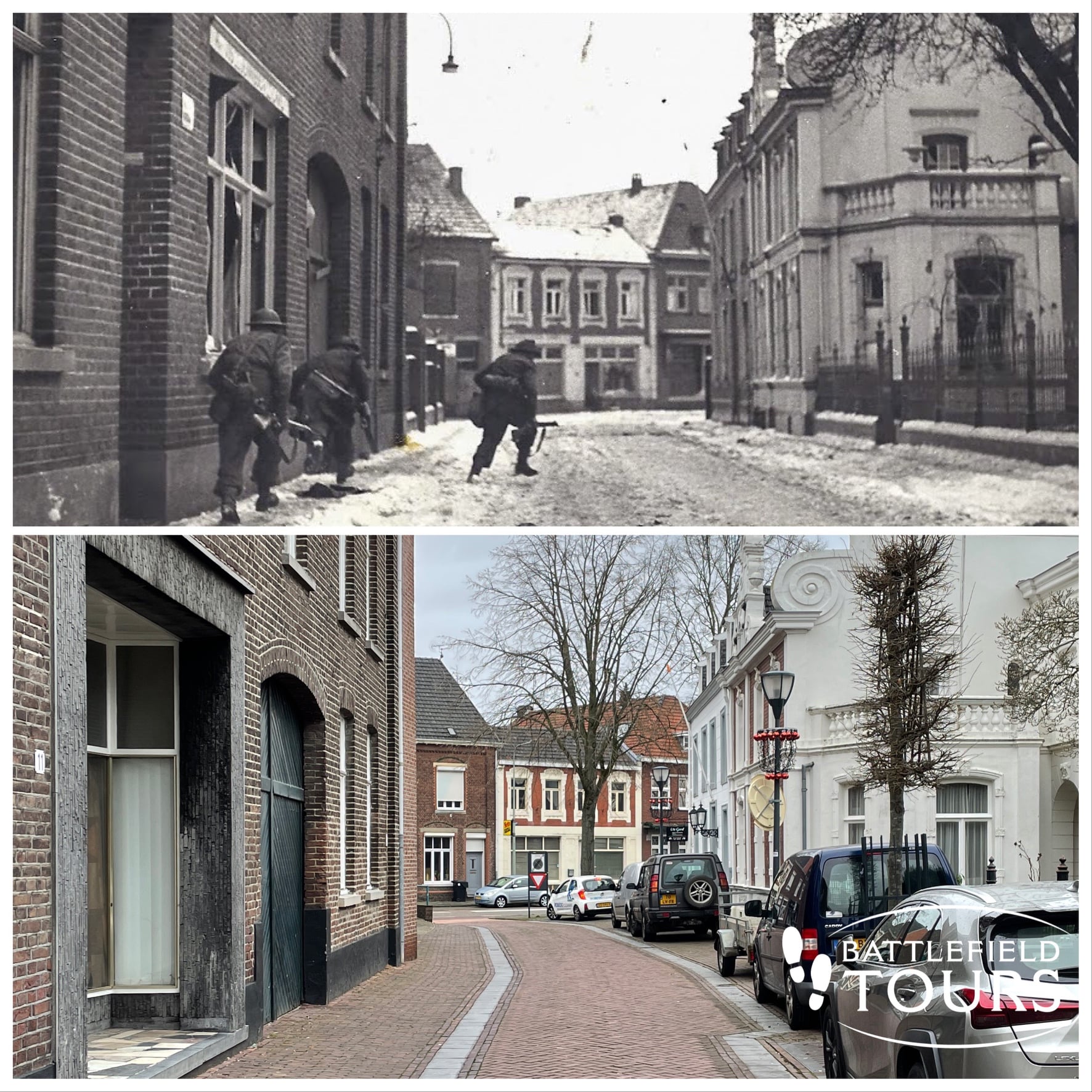 A staged photo of British soldiers of the 2nd Battalion The Devonshire Regiment, clearing Echt of abandoned Germans to continue their advance north. © IWM B 13756

– Battle for the Roer Triangle by H.G.P. Gootzen K. Connor. 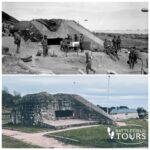