Operation Veritable was part of an Allied pincer-movement aiming to clear the area between the Roer and Rhine rivers of German forces. British and Canadian units attacked from the north, while the Americans closed the trap from the south. By destroying dams in the Roer, the Germans tried to hamper the operation

Operation Veritable started on 8 February 1945. The operation was intended to be one of two pincers aimed at encircling the entrenched German forces. In this scenario British and Canadian forces would constitute the northern pincer of the attack, while U.S. forces would come up from the south to close the trap (Operation Grenade). The German army managed to prevent encirclement by destroying dams in the river Roer (not to be confused with the Ruhr river on the other side of the Rhine) which led to massive flooding; at some points the river was almost two kilometers wide. This flood forced the U.S. soldiers to postpone their assault. The Canadian and British forces had to go it alone. 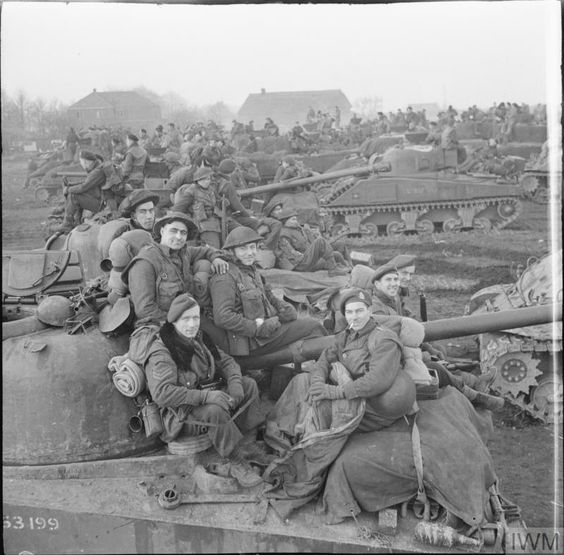 Sherman tanks of 10th Canadian Armoured Regiment (Fort Garry Horse) with infantry of the Royal Regiment of Canada massing in preparation for the assault on Goch, 17 February 1945.

From the outset of the offensive, bad weather complicated Allied operations. General Horrocks, commanding the British forces, later said of the battle: “What was so maddening was that the whole thing could have been so easy if only the frost had continued”. A thaw turned the previously frozen ground into a quagmire, a situation that was aggravated by continuous rain and the fact that the German army had breached the banks of the Rhine. The Allies advanced slowly and were unable to fully exploit their superiority in numbers and equipment.

On 23 February the water had retreated sufficiently to allow the U.S. forces to finally cross the Roer and fulfill their mission. In the words of the Allied Supreme Commander general Dwight D. Eisenhower: Operation Veritable “was some of the fiercest fighting of the whole war […] a bitter slugging match” between Allied and German forces. Illustrious names such as Reichswald, Kleve, Goch, Gennep, Kalkar Heights, Keppeln, Hochwald, The Hochwald Gap, Veen and Xanten would forever be engraved in the minds of the men who fought there.

Duration
The tours in Groesbeek and surroundings takes a full day or several days. Combination with other tours into a multiple day tour is possible.

Transport and pick up location
This is a bus tour. We can start the Battlefield Tour from the central train station in Nijmegen. If you arrive by plane, you will probably fly to Schiphol, Amsterdam’s airport. The easiest way to get to Nijmegen is by train. There is a train from Schiphol to Eindhoven, which leaves every hour. You can plan your train trip using the journey planner of the Dutch railways. You should select Schiphol as your departure station and Nijmegen as your destination. Overnight accommodation is possible in Nijmegen. Book overnight accommodation via this website.