Main targets for the 82nd Airborne Division were; the bridges at Grave, Malden, Heumen, Hatert, Honinghutje and the ultimate goal, the Waal bridges (rail- and road bridge) at Nijmegen. By 1800 hours on September 17, 1944, the 504th had accomplished its assigned mission (although the enemy had managed to destroy one of the bridges). In just four hours, the Regiment had jumped, assembled, engaged the enemy, and seized its objectives. 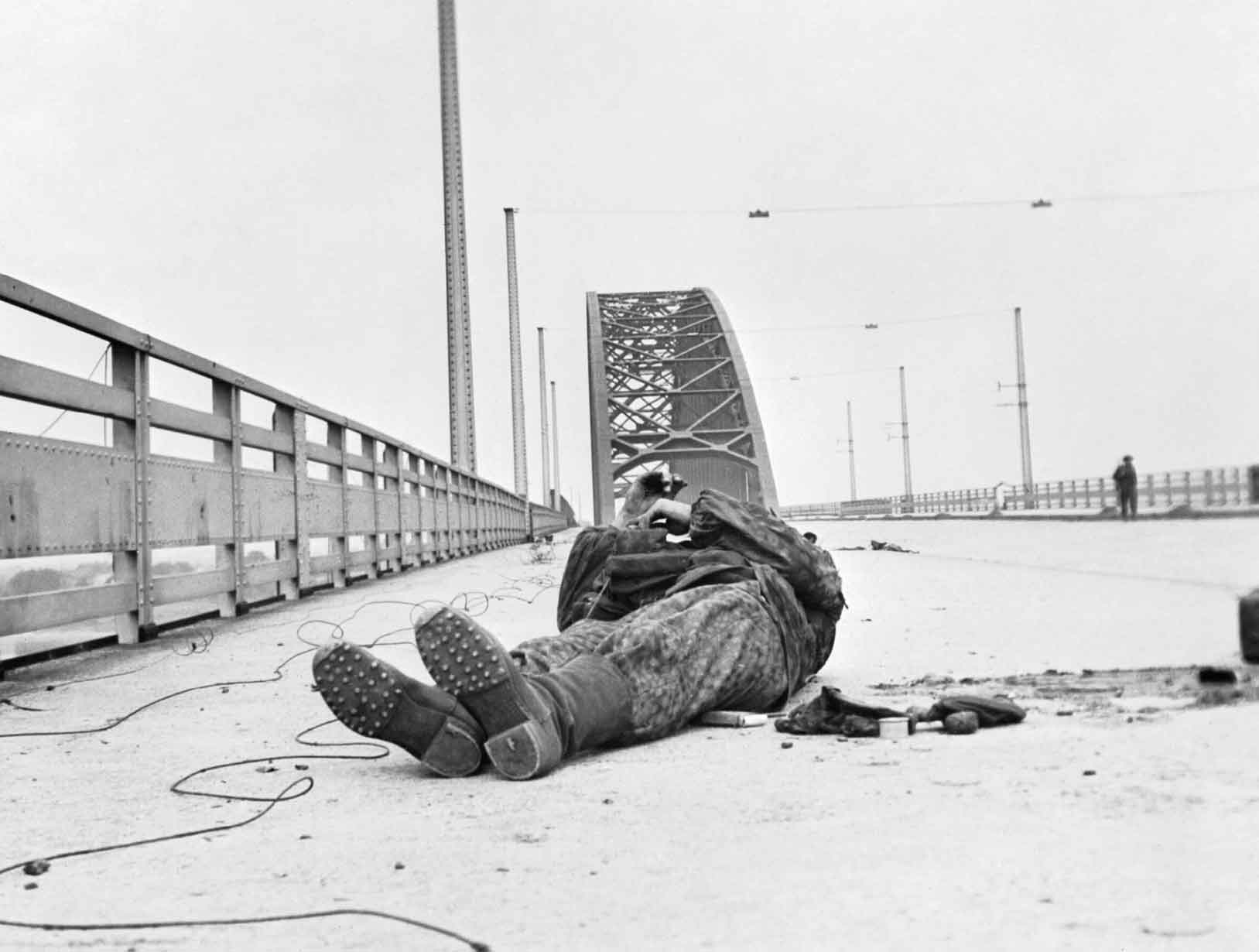 Nijmegen and Grave 17 – 20 September 1944: The bridge at Nijmegen after it had been captured by the 82nd (US) Airborne Division. A dead German SS officer lies where he fell during the attack.

Meanwhile, the 508th was under heavy enemy fire from the German paratroopers of the 3rd Fallschirmjager Division. The enemy continually counter attacked. The fight was intense at times but the 508th held the high ground on a place that earned the nickname “Devil’s Hill.” For two days, the 82nd held its ground and conducted aggressive combat and reconnaissance patrols until the Irish Guards made the ground link-up, spearheading the advance of the 30th Corps of the Second British Army.

However, the Nijmegen road and rail bridges, which were the last remaining link to British Airborne forces in Arnhem, remained in enemy hands. An assault crossing of the river was necessary but it was a seemingly impossible task because it required moving in boats across the 400-yard wide river against German 88’s, FLAK wagons, 20mm cannons, machine guns and riflemen. Nonetheless, the crossing was ordered.

On September 20, 1944, in order to support the 505th attack and secure the bridge at Nijmegen Major Julian Cook and his battalion was ordered to cross the rushing Waal River under murderous enemy fire in daylight with 26 canvas boats

Casualties were high and only thirteen boats returned to carry the second wave of the assault. They managed to establish a beachhead on the northern bank of the Waal and from this small foothold they eventually were able to storm and capture the bridges of Nijmegen and liberate the city. Finally, on November 11 1944 the 82nd Airborne Division was relieved by Canadian troops after 56 days of combat. The division moved to camps near Rheims, France and placed in reserve along with other airborne units.

Duration
The tours in Nijmegen and surroundings takes a full day. Combination with other tours into a multiple day tour is possible.

Transport and pick up location
This is a bus tour. We start the Battlefield Tour from the central train station in Nijmegen. If you arrive by plane, you will probably fly to Schiphol, Amsterdam’s airport. The easiest way to get to Nijmegen is by train. There is a train from Schiphol to Eindhoven, which leaves every hour. You can plan your train trip using the journey planner of the Dutch railways. You should select Schiphol as your departure station and Nijmegen as your destination. Overnight accommodation is possible in Eindhoven or Nijmegen. Book overnight accommodation via this website.