Comment are off
Stoppelsjoel
75 Years after WWII, World War Two 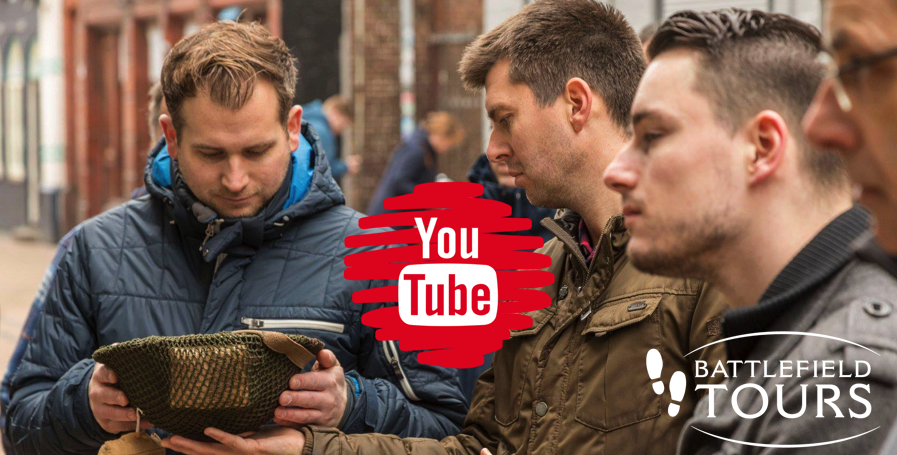 After measures to stop the spread of the coronavirus worldwide, many events, commemorations and lectures in the context of 75 years after the Second World War have been canceled or rescheduled. We do not want to let this momentum pass by and that is why we want to reflect on this anniversary with a number of online presentations.

Despite the current crisis, it is still important to commemorate and remember the end of the Second World War in a dignified and interconnected way. At Battlefield Tours, we also want to reflect on 75 years of freedom and that is why we have decided to organize a number of online presentations through YouTube and Facebook. You can watch these presentations free of charge from your own living room and look back as often as you want. This way you can reflect online with us on 75 years after the Second World War! Below is an overview of the organized online presentations.

On Tuesday 20 October 2020, expert and guide Roland Gaul will give a presentation at 8:00 PM on the battle of the Bulge in Luxembourg, the southern flank.

In December 1944, when the Allies had advanced unto the Luxembourg- and Belgian Ardennes, they were completely surprised by three German armies. This was the beginning of the Ardennes Offensive or ‘Battle of the Bulge’. It was a last desperate attempt of the German Wehrmacht to cut through the allied lines. The battle lasted more than six weeks and took many lives on both sides. With this operation, codenamed Wacht am Rhein, Hitler intended to split the allied armies by a surprise counteroffensive. He wanted to seize the bridges over the Meuse River in order to advance further via Liège to the port of Antwerp. On the American side the surprise was complete.

Roland Gaul’s presentation will provide an insight into the events in the southern sector of the front that went through the small country of Luxembourg. Much of the information Roland has at his disposal comes from first-person accounts from participants (American and German eye witnesses/veterans), as well as Roland’s own research he has done over the past 40 years.

Roland J. Gaul was born in Diekirch, Luxembourg on October 27 in 1955. After his elementary school education, he graduated from the “Lycée Classique de Diekirch” (junior college) in 1975 (science/Latin section), whereafter he continued his higher education at the Royal Military Academy (ERM/KMS) in Brussels, Belgium as an officer candidate of the Luxembourg army. After one year as a primary school teacher, Gaul worked at the State Savings Bank for seven years, after which he entered the American Embassy in 1986, where he became the local representative of the United States Information Service (USIS) as the Embassy’s public liaison and information assistent.

His responsibilities comprised the areas of Public Affairs, Information, and Cultural Affairs. In 1997, Gaul accepted the position as liaison officer of the (SREL) security service of the the Luxembourg security service, a position, which he held until 2004. This capacity he represented his service in several international fora and acted as a key point of contact for international service liaison in security-related issues. In 2012, he muted to the Luxembourg army to take over the lead of the National Museum of Military History in Diekirch, as its Director/Curator, which he had founded himself as a volunteer 30 years before. Gaul is married to Silvia Treml (Austrian) who runs GAUL’s LEGACY TOURS.Together with Silvia he organizes individual, tailored legacy tours on WWII history in Luxembourg and the neighboring areas in the Belgian Ardennes, German border areas and northern France. Roland has retired end of October, 2016 and now fully concentrates on field guiding- and on-site presentations.

On Tuesday 27 October 2020, historian and guide Edwin Popken of Battlefield Discovery will give a presentation about the battle of Hürtgen Forest at 8:00 PM. For the American soldiers, it’s very name – with its first syllable ‘hurt’ – became a byword for injury and death.

On 12 September 1944, the first U.S. soldiers crossed the German border near the village of Roetgen outside of Aachen. But due to supply problems and the failure of the Allied ground-air offensive in the Netherlands known as Operation Market Garden, the Allied advance towards the Rhine was then halted. The German forces which had to some extent fallen into disarray during the retreat, were able to regroup. The German ‘home front’ was mobilized and militarized, by means of terror and repression against the German population whenever necessary.

The forest constituted unfamiliar and forbidding terrain, and its defenders were easily concealed. These gloomy evergreen woods, bare hilltops and deep gorges bounded by Aachen, Duren and Monschau were of no obvious strategic importance, but the natural landscape provided a perfect snare. The Germans had scattered the thickets with pillboxes, machine-gun nests, barbed wire and minefields, while the woods were difficult to penetrate, either on foot or by vehicle. Heavy rainfall and then snow compounded the formidable task of the American soldiers.

Nonetheless, the Allies pushed into the rough and unfamiliar terrain in order to secure their advance towards the Rhine. The battle proceeded from mid-September 1944 to mid-February 1945, and ended with an Allied victory which, however, cost numerous casualties on both sides. To this day, hundreds of soldiers on both sides remain unaccounted for, and their remains continue to be found.

Edwin Popken holds a Master degree in Military History from the University of Birmingham, UK. He is an accredited member of the International Guild of Battlefield Guides (badge nr. 93). Edwin founded his company Battlefield Discovery in 2012 and has run the company since then. His interests are not only in military strategy and operations, but specifically in connections between events in 1944/45 and in the experience of war. He has a broad experience in guiding and organising tours ranging from a few hours to multiple days. Edwin guides for private individuals, small groups and coach groups. He has experience guiding for people with a generic interest in WW2, veterans and families, school groups and military groups – battlefield studies and staff rides – both domestic and abroad. His services are hired by several tour operators.

On November 3, 2020, expert and guide Frank Gubbels from Frank Gubbels Battlefield Guide will give a presentation about the 30th Infantry Division, also known as Old Hickory, at 8:00 PM. This division was the first Allied unit to set foot on Dutch soil.

Frank Gubbels is born in 1982 and lives in the town of Noorbeek. Noorbeek is the first liberated municipality in the Netherlands during the Second World War. The liberation took place on Tuesday, September 12, 1944. In 1994, numerous American veterans were present during the 50th anniversary of the liberation of his village. That made a big impression on him as a twelve-year-old. Frank then delved more into the history of the Second World War. Frank began to wonder why these people came here to fight and give their lives for our freedom. Over the years, Frank has had the pleasure and honor of speaking to countless veterans and listening to their experiences. It soon became clear to Frank that these stories should never be lost. Therefore, ​he believe it is his duty to keep their memories alive by educating the public and giving them an insight about the liberation of this area.

On Tuesday November 10, 2020 we will organize a presentation at 8:00 PM about the role of Glider Pilots during the Second World War. This digital presentation will be provided by the expert and guide Luuk Buist.

Luuk Buist is a specialist in the field of Glider Pilots and co-author of the book Glider Pilots at Arnhem. Luuk will explain the role of Glider Pilots based on a perfect presentation in terms of layout and content. This presentation deals with the founding and organization of the regiment. How and where gliders were built and how they were loaded. Glider Pilots were trained according to the Total Soldier concept, so that the pilots could participate in the operation after landing. The presentation will provide an animation of the course of the Battle of Arnhem.

The memory of the Second World War in general and that of the Battle of Arnhem in particular should not be forgotten. Luuk Buist was born and raised in Oosterbeek and started my career in the Dutch Army where he served for nine years as an NCO in the Signals Corps. He has been interested in battlefields since he was a young boy. When his father gave him an airborne helmet, the spark was there. Both his parents lived in Oosterbeek during the Battle of Arnhem and his grandfather was one of the civilian casualties.

He started to read books on the subject and started to collect memorabilia. His first book was Arnhem Lift by Louis Hagen, whom he met many years later in 1994. As co-author he was involved in two books on the Battle of Arnhem and have contributed to more than 35 publications. For over 30 years, he have organized tours for groups in various compositions. He was awarded the AAC Association Bronze Medal and made an honorary member in recognition of his role educating today’s AAC soldiers about the battle of Arnhem. He is specialised in customised battlefield tours of the Battle of Arnhem. In addition to the strategic part of the battle, many personal stories are told.